Emu belongs to Ratite family of birds. It is the third biggest bird species after Ostrich and Cassowary. They are originated from Australia. Emu is a social bird with dark whitish complexion. The birds live in groups and can thrive under varying climatic conditions ranging 0 degrees C. to 52 degrees C. These Birds are Omnivorous and eat leaves, vegetables, fruits, insects, worms. They can be feed Modified poultry feed. 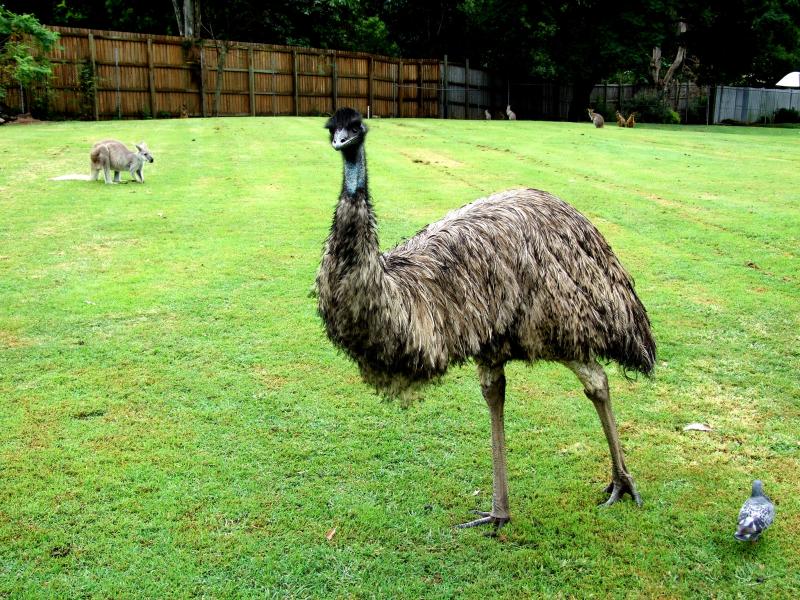 A year-old EMU is five to six feet in height, and weigh 30-40 Kg’s and upon completing 18-10 months EMU weighs in the range of 50-60 kg. During its growth, it changes its colour thrice. On a newborn up to 3 months, there will be stripes on its body, after 4 months it starts looking chocolate brown. After 1 year it again starts changing its colour, its feather on the neck goes away and neck looks greenish blue and feathers exhibit a variety of colours but mostly in brown and black shades.

There is no visible distinction between a male and a female EMU. Usually 18-month-old female is capable of reproduction; however in some EMU’s this period may extend up to 20 to 24 months too. As per available national data on an average during the breeding period, female EMU lays up to 32 eggs. The breeding period is 6 months, from October to March.

Emu eggs are dark green in colour. Compared to the egg of a hen they are 10-12 times bigger. Female EMU may lay eggs after every 3 to 5 days.

EMU has a long life and lives at least for 30 and maximum up to 40 years. A properly managed EMU is capable of reproduction for at least 25 years. We can take it for granted that they produce 30 young ones per year. So in simple terms if a farmer keeps these birds, takes good care of birds, they will give him healthy financial returns in forms of eggs & chickens for 25-27 years of age. After it stops’ reproducing it is a minimum of 50 Kg bird to sell for various products like meat, oil & skin and still make money for the farmer.

EMU egg is the most important among various products in emu farm. In the initial period, the eggs should be used for the purpose of reproduction. In the later period, the eggs will be used for growing fleshy young ones. In emu farming, the egg production & hatching remains a very important everlasting process. In future EMU eggs, production will definitely fetch a large amount of profits. These birds live for thirty to forty years and remain sexually active for at least twenty-five years. Hence with a single investment one can obtain long-term production & profit. A single bird gives minimum twenty and maximum forty eggs every year. These eggs have dark-green colour. Each egg ways 400 to 600 gms.

a) Emu chick weighs approximately 70% of emu egg weight
b) Emu chick breeds naturally and/ or by using an incubator
c) Artificial incubation is often conducted at a temperature of approximately 97.5 degrees Fahrenheit
d) Average incubation time ranges from 48 to 52 days
e) Born chick colours are coffee brown with white line marks
f) Colour will change after 3 months
g) Nutrition food and purified water is must up to 3 months
h) 3 months old chick can either be grown for future reproduction and/ or can be sold for other farmers to begin farming;
i) Reproducing chicks can be repeated with an adult pair of EMU’s for minimum 25 times (25-40 eggs every year).

Low on cholesterol, high on protein 97 to 98% fats free, what sounds like a well-rehearsed line designed to sell the benefits of consuming EMU meat. In India there are estimated 1,000 EMU farms, 300 in Maharashtra itself are up and running in the today. While 1,000 may seem like a big number, but it’s a drop in the ocean in comparison with the poultry farms that dot the country. Likewise in production, there is an estimate of about 33,000 tons of EMU meat being produced in India now, which is a fraction of the 1.9 million tons of chicken meat produced.

The bird’s meat is considered a healthy substitute for other red-meat variants such as lamb or beef. It is supposed to be extremely nutritious, with fat and cholesterol content being much lower than in any other red meat.

Each and every part of EMU’s body is commercially valuable. The most important is, of course, its meat which is 97 to 98% fats free. EMU meat is rich in proteins; it contains plenty of iron, vitamin B-12, hence as the modern research shows ‘EMU meat is an excellent diet for people suffering from the heart–ailments.

EMU meat has less fat content, it is easily digestible, very tasty and hence it serves as a very good alternative for mutton and chicken. Therefore, there is a great demand for it in the international market. Each bird can yield about 25 kg of meat.

Traditionally Emu oil has been used for the treatment of muscle and joint pains. Clinical experience with Emu oil has shown that its two major benefits are its anti-inflammatory properties and its ability to penetrate the skin. It also appears to provide some solar protection. The penetrating effect appears to be related to its non-phosphorous composition

EMU – Feathers are double quilted, attractive and velvety to the touch. They are soft, light and nonallergic, which makes them the ideal material for a host of applications. They are in demand both in the fashion and in art and craft industries. They are used as the feather duster, feather pad, fans, bows, and masks, finishing metals prior to painting, weather-proof apparels, and pillows, blazers, sweaters, jewellery, and craft items.
EMU – Skin is very soft and smooth; hence it has a great demand in the international leather industry for producing new fashionable goods. A variety of goods can be produced from EMU-skin. A fully grown up bird can yield 6 to 8 sq. ft. leather.

EMU skin is also a Good option for crocodile skin, as EMU leg skin is easily available and have same look and feel.

EMU – Nails are polished, finished and designed in different ways to be used as various jewellery pieces for a woman.